14-September-2021
On Tuesday-14-September the Bogota Board of Education held their first meeting for the month of September.
In his Superintendents Report Mr. Damian Kennedy had a number of statements.  The first major item he talked about was that there was one class that had a positive case of covid-19 reported. And a second class had covid-19 like symptoms reported. Acting on the advice from the Department of Health both classrooms will be shutdown, and those Students will do virtual learning in the meantime.
Superintendent Kennedy also said that the Bogota Board of Education is seeking applications to fill a vacancy on the Board, until the December 31, 2022. The requirements to serve as a member of the Bogota Board of Education include being a citizen and resident of Bogota for at least one year, registered to vote in the district and not being disqualified to vote, not being convicted of a crime, and having the ability to read and write. If interested, please submit a letter of interest with your background and reason for wanting to be a board member to: Irfan Evcil Business Administrator/Board Secretary Bogota Board of Education 1 Henry C. Luthin Place Bogota, NJ 07603 by no later than 3:00 pm on Friday, September 24, 2021.
Aftercare registration has been open, and the program should begin in mid-October. The Aftercare program is free to all families that qualify for the free  or reduced lunch program. Superintendent Kennedy  reminded the audience, and the Trustees that this school year lunches are free all Students. Bur he strongly recommends that families should still apply for the Free or reduced lunch program. This not only allows families to receive the free After-care, but it also aids in Bogota being awarded more Federal or State money to support these programs. At the end of his statement  Superintendent Kennedy was asked bout what is the policy on Students coming to school with “normal” cold symptoms. He said that any Student with similar symptoms such as a fever, running nose should stay at home, or they will be sent home if needed.
In the second public comment session Superintendent Kennedy answered the question being asked. Questions of note was to clarify the District policy on verifying the residency of any Student attending a Public School in Bogota.  He said that the District does investigate any reports of a Student illegally attending Bogota School. Even to the point of observing the address of record to see if the Student leaves and returns to that address. He added that when there is proof that a family has moved out of district the Student needs to enroll in the new school, or the Family needs to pay tuition to Bogota for each Student.  One exception is a Student of divorced Parents. If one Parent still lives in the District their Student may attend Bogota Schools. Even if the Student sometime lives in another District with the other Parent. But the Bogota  Public Schools are not responsible to transportation. This only applies to the Student immediate Parent, other relatives, or friends are not considered  under this policy.  This is way at certain grade levels Student must re enroll in Bogota with proof of residency.
Another question as to restate the mask policy.  Superintendent Kennedy said that by state mandate mask must be worn, at all times, in  a District Building.  While outside for gym ,or other activates, mask wearing is optional. Also  when a Student is in transit  to , or from,  school outdoors masks are optional. If a Student is confronted by any District employee to put on, or remove their mask they should be reported to the Board of Education as soon as possible.
There were only two items to be voted on at this meeting. One was to accepted the resignation of Physics Teacher Ms. Sarah Kokkinakis. The other was to formally accepted the resignation of Ms. Amanda Montgomery as a Trustee from the Bogota Board of Education. before the vote Board President Ms. Kathy VanBurren and Trustee Ms Lisa Kohles express regret in Ms. Montgomery decision to step down. They talked about her six years as a trustee as she was a key part of in contract negotiations for the District. Also with her being a part of funding the new front entrance to the High School, a refurbish Speary Gym, creation of the Bogota Middle School, and improvement to Bixby and Steen Schools. Along with the hiring of current Superintendent Mr. Damian Kennedy.
All consent agenda items were moved to be formally voted on at the next Board meeting.
Before the meeting ended Board President Ms. Kathy VanBurren announced that she will be stepping down as a Board trustee once her residence in Bogota has been sold. She asked if it would be better to resign now or wait ( if possible) until a replacement has been named.
The next Board of Education meeting will be on Tuesday-21-September and is scheduled to start at 7:00p. It will be a hybrid meeting with in-person attendance and available online. The in person meeting will be held in the High Cafeteria located at 2 Henry Luthin pl Bogota, NJ All in person attendee will be required to wear mask at all time while in the building.
For more information please go their web-site at:  www.bogotaboe.com
( To help support Bogota Blog NJ with it's coverage of Local stories & sports
please contribute at: donate to Bogota Blog NJ) 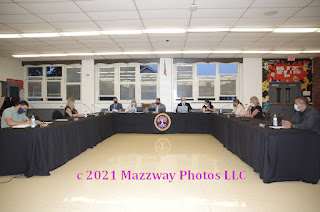 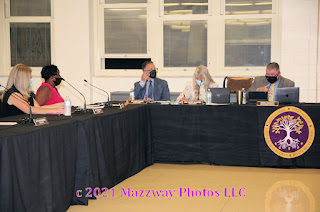 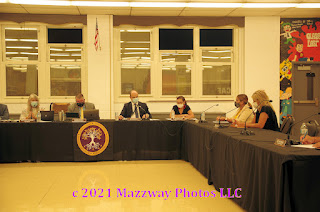