17-March-2021
On Tuesday-16-March the Bogota Board of Education held their second meeting for the month of March.  In his report Superintendent Mr. Damien Kennedy talked about the need to suspend the Bogota Lady Bucs Volleyball schedule for a two week quarantine.  This is due to a number Students being in contact with others who have tested positive for the covid-19 virus.  Since the Middle School Volleyball  and Wrestling team were not in contact with the Varsity  Volleyball team their schedule games can continue for now. Also the contact did not occur within the High School, and in-person classes my continue in the hybrid form.  Both the Elementary  schools will continue with their staggered 3-day/ 2-day in person classroom weeks. This will have one group will attend Monday, Wednesday, & Thursday for a week. And the next group will attend Tuesday, Wednesday , and Friday the next week. Superintendent Kennedy added that the High School had only 16 Students  coming into the building for in person learning. He continued and said the district will continue on its present schedule until Spring break and will determine what can and can not be allowed after that.
All consent agenda, and newer  agenda items were passed with a unanimous vote.  Some of the newer items of note was to accept the resignation of Ms. Mary Lou Collins, the Nurse at Bixby School, at the end of the school year. And  of Mr. Luis Ramirez who was  Maintenance Personal in the District, which goes into effect immediately.
One motion was added, which was to allow for a vote on hiring a new Board Attorney after the Executive Session. This was passed by a 5-4 vote.  During the New Business portion of the meeting the Trustees interviewed three candidates to replace the current Board Attorney.  All three Attorneys were asked a series of questions about their quantification on why they should be hired. After the interview process was complete the Board when into Executive Session.  When the meeting was again called to order a motion was made made to accept a new Attorney. There was then another motion made to add a second Attorney to be considered.  The motion to add the second Attorney was rejected by a 5-4 vote. Then the Trustees voted to accept Mr. William Soukas from Nowell P.A. of Hackensack, NJ  to be the next Board of Education Attorney. Mr. Soukas was approved by a 5-4 vote.
The next Board of Education meeting will be on Tuesday-20-April and is scheduled to start at 7:00p. This will be a virtual meeting and is open to the public.  Access information to be announced at a later date. Updates and announcements from the Bogota Board of Education will be available at  www.bogotaboe.com
Addition information about the District reopening plans can be found at: Bogota School re-opening 2020 ;  Bogota hybridvirtual-parent-portal
Along with information in both English and   GUÍA DE USUARIO - Español  at  https://www.bogotaboe.com/domain/423
( To help support Bogota Blog NJ with it's coverage of Local stories & sports
please contribute at: donate to Bogota Blog NJ) 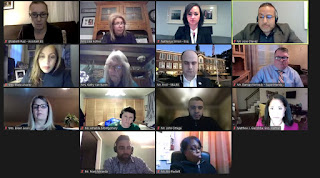