On Thursday-18-March the Ridgefield Park Lady Scarlets Volleyball traveled to Ft. Lee to play the Bridgewomen.
Ridgefield Park would serve first but the Bridgewomen would score first. The opening set   began with a series of ties points with only one lead greater than a single point.  With the scored tie at six Ft. Lee had a run of six points together to take the lead for the rest of the set. The home would out-score their guest by a 3 to 1 margin, but the Lady Scarlet would stay in the contest. The Bridgewomen did keep a large enough  spacing and win the first set by the score of 25-17.
The second set started with Ft.Lee serving and scoring first. Ridgefield Park forced a couple of ties with the last one being a 3-3 score. Then the Bridgewomen moved ahead for the rest of the match with four straight points.  Ft. Lee control most of this set as well , but could reach a double digit lead when the scored the winning point at 25-15
This makes Ridgefield Park's record 1-1.
The Lady Scarlet's were led by Sanatina Protasio with 7 Kills. Isabel Gonzalez record 7 Digs.  The Bridgewomen were led by Kylie Clan with 7 Kills, Yishi Hung with 14 Assists, and Ayla Kim having 10 Digs.
Ridgefield Park is next scheduled to play on Saturday-20-March when they travel to Dwight-Morrow. This is scheduled start at 11:00a.  The Junior Varsity game will follow at 12:30p.   Only  a limited number home team Parents are allowed to attend games in person. 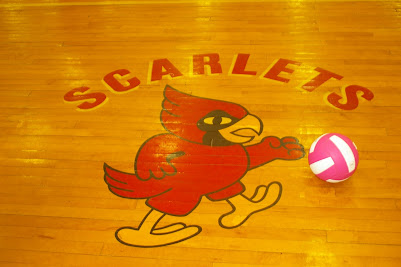