On the Weekend of 26 & 27th-March the Ridgefield Park Lady Scarlets Volleyball played two home matches.
On Friday-26-March they hosted the Mahwah Lady Thunderbirds. After trailing late in the first set, Mahwah was able to put together a five straight point to win the opener by the score of 25-22. Ridgefield Park would service first in the second set and started off with a 4-0 lead.  They would have the advantage for the rest of the set, but needed to hold off a Lady Thunderbird run. This gave the Lady Scarlets a 25-19 win, and tie the match at one set apiece. The third set had Mahwah service first, but Ridgefield Park took the first lead.  Then came a series of ties, with the last one having both teams with 12 points. The Lady Thunderbirds then opened a four point lead after that. They would go on to win the final set by a score of 25-19 and the match 2 to 1.
On Saturday-27-March they would host Lady Bears from Bergenfield. With the Lady Bears serving first Bergenfield jumped out to a 7-0 lead.  They would then open it to an over ten point advantage. Bergenfield's lead would not drop below Double Digits for the rest of the set. They would win the first set 25-12.  The Lady Scarlets opened the second set, only to Bergenfield account for the 10 of the first dozen points. Ridgefield  Park would not let the set go completely out of reach and closed to within five of the visitors. The Lady Bears would not let their opponents get any closer and won the set by a score of 25-19 and a 2-0 match victory.
After the weekend Ridgefield Park would now have a record of  4-4.
Ridgefield Park is next scheduled to play on Monday-5-April when they host Ft. Lee. This is scheduled start at 4:00p.  The Junior Varsity game will follow at 5:30p.  Only  a limited number home team Parents are allowed to attend games in person.  This can be seen: at Ridgefield Park Athletics 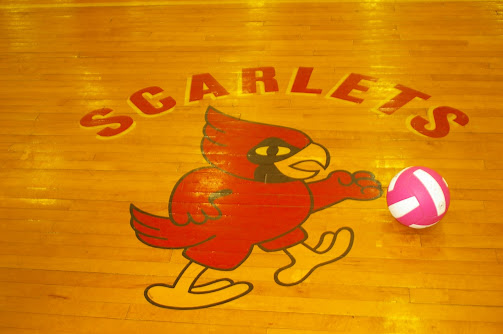